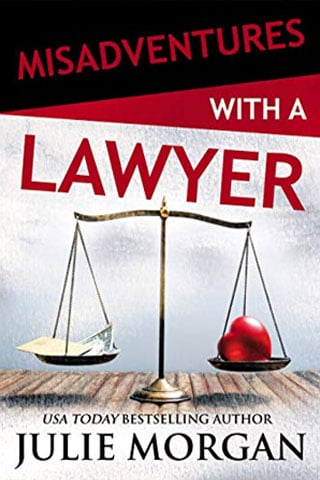 Misadventures With A Lawyer by Julie Morgan is Now Available!


In the court of love, will either of them object?

Legendary lawyer Chase Newstrom is as famous in court as he is with the ladies. His work-hard, play-harder mindset is why he’s never lost a case…or lacked a model on his arm. But a recent twist before the bench threatens to derail his perfect record.

Chase turns to junior associate Ainsley Speire to solve his case’s problems after hours so he can gallivant around town with yet another lady friend, and Ainsley, despite being driven and focused, is none too pleased with her boss’s demands. She’s had to cancel long-standing plans at the last minute, again…and vows it’s for the last time.

Ainsley sits down with Chase’s most expensive scotch in one hand and fancy pen in the other and pours it all out, literally and figuratively. When Chase finds the note—and a passed-out Ainsley—he’s intrigued. Perhaps there’s more to the soft-spoken Ms. Speire than he thought.

Ainsley wakes to Chase’s trademark cocky grin, and Chase sees a new spark in Ainsley’s eyes. Anything between them would be an HR nightmare, but is there a chance Chase and Ainsley are willing to work together on one more case? A case that promises a lifetime sentence of love?